Controlled scar formation in the brain

When the brain suffers injury or infection, glial cells surrounding the affected site act to preserve the brain’s sensitive nerve cells and prevent excessive damage. A team of researchers from Charité – Universitätsmedizin Berlin have been able to demonstrate the important role played by the reorganization of the structural and membrane elements of glial cells. The researchers’ findings, which have been published in Nature Communications*, shed light on a new neuroprotective mechanism which the brain could use to actively control damage following neurological injury or disease.

The nervous system lacks the ability to regenerate nerve cells and is therefore particularly vulnerable to injury. Following brain injury or infection, various cells have to work together in a coordinated manner in order to limit damage and enable recovery. ‘Astrocytes’, the most common type of glial cell found in the central nervous system, play a key role in the protection of surrounding tissues.  They form part of a defense mechanism known as ‘reactive astrogliosis’, which facilitates scar formation, thereby helping to contain inflammation and control tissue damage. Astrocytes can also ensure the survival of nerve cells located immediately adjacent to a site of tissue injury, thereby preserving the function of neuronal networks. The researchers were able to elucidate a new mechanism which explains what processes happen inside the astrocytes and how these are coordinated.

“We were able to show for the first time that the protein ‘drebrin’ controls astrogliosis,” says study lead Prof. Dr. Britta Eickholt, Director of Charité’s Institute of Biochemistry and Molecular Biology and ECN PI. “Astrocytes need drebrin in order to form scars and protect the surrounding tissue.” By switching off the production of drebrin inside astrocytes, the researchers were able to study its role in brain injury in an animal model. They used electron microscopy and high-resolution light microscopy to investigate cellular changes in the brain, in addition to undertaking real-time investigations using isolated astrocytes in cell culture. “Loss of drebrin results in the suppression of normal astrocyte activation,” explains Prof. Eickholt. She adds: “Instead of engaging in defensive reactions, these astrocytes suffer complete loss of function and abandon their cellular identity.” Without protective scar formation, normally harmless injuries will spread, and more and more nerve cells will die. 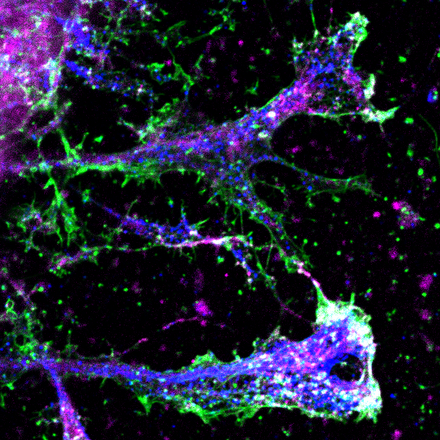 Astrocytes in cell culture (marker protein GFAP in blue), which increase the production of the protein drebrin (magenta) in response to injury. The actin cytoskeleton is shown in green. Photo: Kai Murk/Charité

To enable scar formation, drebrin controls the reorganization of the actin cytoskeleton, an internal scaffold responsible for maintaining astrocyte mechanical stability. By doing so, drebrin also induces the formation of long cylindrical membrane structures known as tubular endosomes, which are used in the uptake, sorting and redistribution of surface receptors and are needed for the defensive measures of astrocytes. Summing up the researchers’ findings, Prof. Eickholt says: “Our findings also show how drebrin uses the dynamic and versatile cytoskeleton as well as membrane structures to control astrocyte functions which are fundamental to the defense mechanism against injury.” She continues: “In particular, the membrane tubules which are formed during this process have not previously been described in this manner, neither in cultured astrocytes nor in the brain.”

“Drebrin’s role as a cytoskeletal regulator suggests that it may be a risk factor for severe outcomes in both neurological and other disorders, because loss of the protein can produce similar changes in astrocytes,” says Prof. Eickholt. She adds: “It is also possible that individuals with defects in the drebrin gene – comparable to those in the animal model – might remain without symptoms until triggers like cellular stresses, environmental toxins or diseases occur.” It is hoped that investigations involving patient samples will elucidate the extent to which drebrin also plays a role in degenerative brain disorders, such as Alzheimer's disease.