Interneurons are the main inhibitory class of cells in the brain of mammals. They come in many flavors -- varying in shape, localization, connectivity and intrinsic properties. Despite this variability, they are mainly attributed to a simple task: to maintain the excitation / inhibition balance necessary for normal brain functioning. Indeed, disruption of their proper functioning is associated with several neurodegenerative disorders such as Alzheimer’s, Parkinson’s, epilepsy, etc.

For decades, interneurons were assumed to simply sum their inputs and, if strong enough, cause the cell to fire. This simple type of computation, also referred to as a “point neuron” computation, ignores any non-linear influences that could be generated in the dendrites of these cells. Recent experimental findings however, report nonlinear dendritic events in other interneuron subtypes, implying that interneurons may be much more than simple point devices. 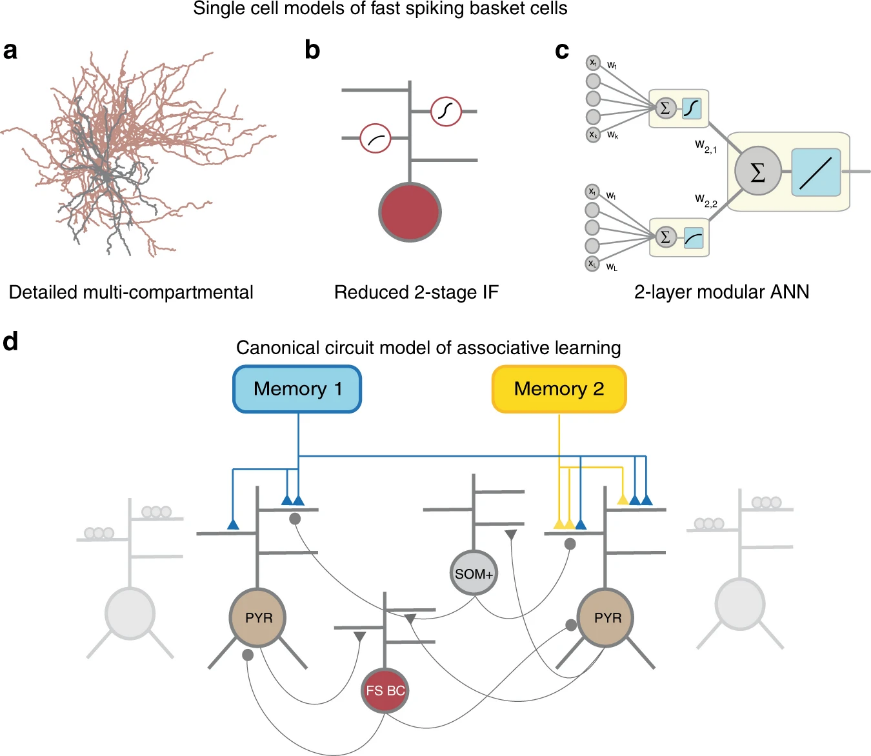 Alexandra Tzilivaki et al. developed a toolset of computational models covering two brain areas related to learning and memory functions, the hippocampus (CA3) and the prefrontal cortex. This toolset consisted of a) full-blown morphologically and biophysically detailed models of Fast Spiking Basket Cells (FSBCs), b) reductions of these cells in the form of artificial neural networks and c) a network model, able to form new associative memories.

The first interesting finding was that in all the model cells tested, in both brain areas, FSBCs had non-linear dendrites. Depending on their morphology and biophysics, these dendrites could either boost incoming inputs (supra-linear dendrites) or suppress them (sub-linear dendrites). The presence of these nonlinearities enabled individual FSBCs to produce a wide range of responses that could not be captured by a point neuron reduction. Instead, the best way to capture what an FSBC is actually computing is to assume a 2-layer Artificial Neural Network that incorporates the two types of dendrites, found in these cells: supra-linear and sub-linear. This finding raises this particular interneuron subtype to the same level of processing power as pyramidal neurons, the main excitatory neurons involved in most complex behaviors, including learning and memory.

Taking it one-step further, the network model simulation outcomes showed that the nonlinear dendrites of FSBCs can significantly enhance learning and memory, compared to a respective network with only point FSBCs (implemented with linear dendrites). This prediction shows the wider implications of considering dendritic nonlinearities in interneurons, a deed that has been ignored for years.

In summary, this work provides a novel view of dendritic integration in FS interneurons that extends in hippocampal and cortical areas. It also provides a more accurate reductionist description of interneuron processing. Further experimental testing will broaden our understanding of how interneurons exploit their complex dendritic processing capabilities so as to contribute to complex brain functions.

In the words of Alexandra: “Definitely, I love interneuron-related research and I do believe that many great research outcomes in the near future will change the common sense that these neurons are simply our brain’s peace-makers. I am excited and motivated to continue my ‘interneuron’ journey during my PhD thesis research at ECN. Let me finally dedicate this work to all young female scientists with disabilities, like me.”